Changing the sites primary language to ease up the writing process and get more into detail.

As promised, some pictures from the finished machine. 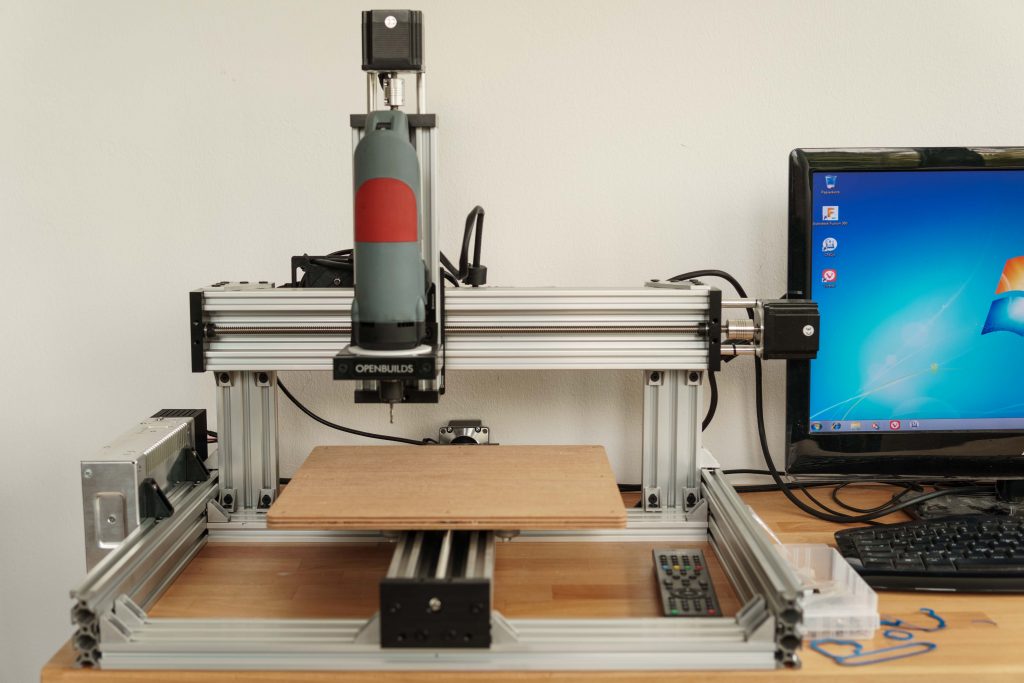 I used some plywood as the buildplate that I had in stock. A wasteboard needs to be added. 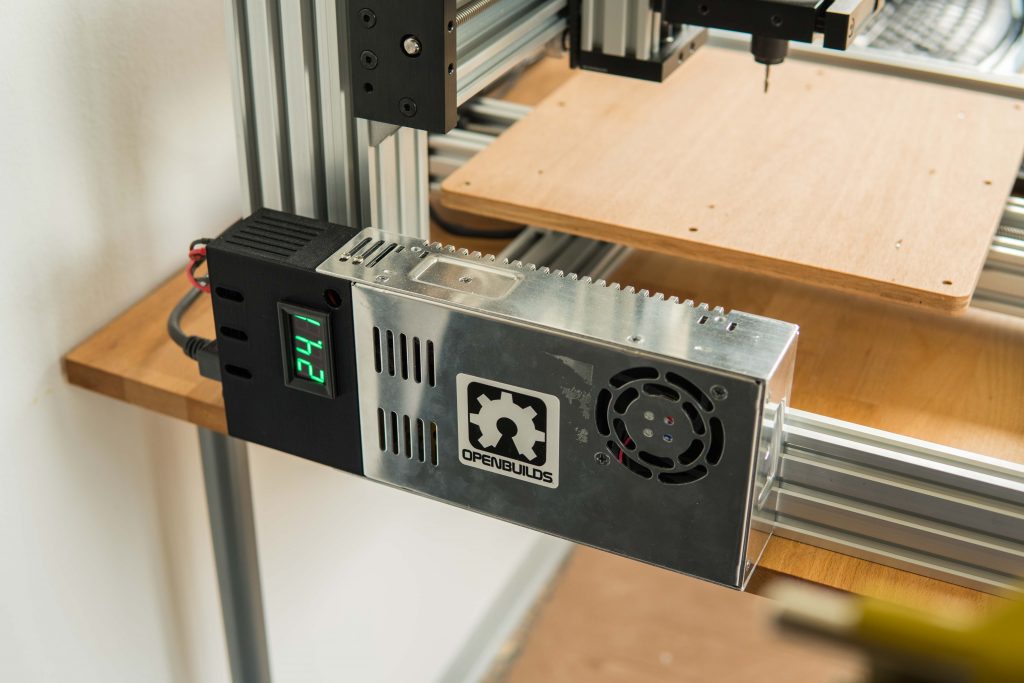 The power supply with the neat little lcd voltmeter. I send a notification to ooznest regarding the not so perfect crimp connections and they will look into it. 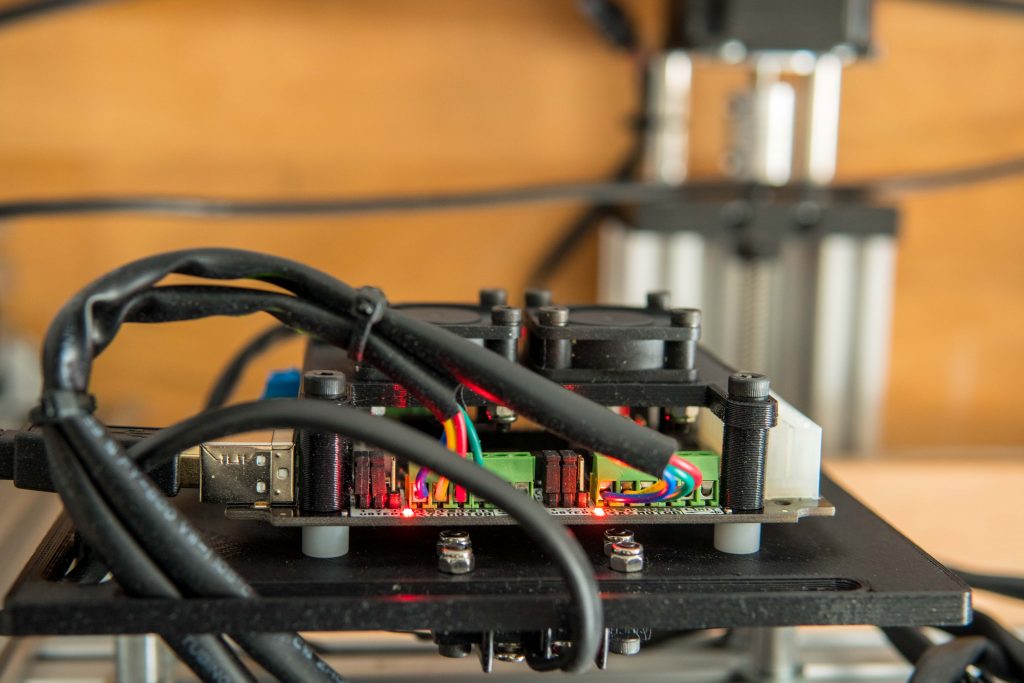 The wired controller. It was pretty noisy at the beginning but after some e-mails with the very kind and fast support at ooznest we narrowed it down to a single deffective fan. Could have happened during the build process or during shipping, despite the good packaging. Ooznest offered a replacement so thats not a problem anymore. I initially thought that the fan itself creates the unpleasant noise by design but the bearings were defect so one of them ran unsmooth. 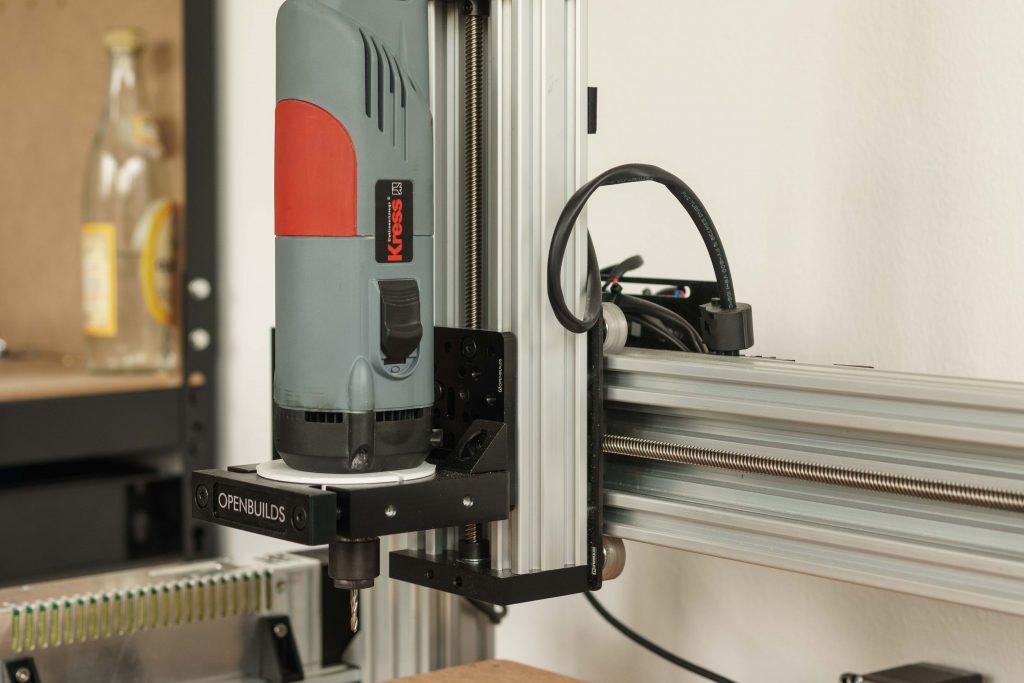 The spindle in position, I had to use an adapter from the 71mm to 43mm Euro mount. This might work for the first cuts. Would be nice to have a suitable option in the shop for a 43mm tool mount. It is stiff enough for now.

The first test cuts are still ahead so I can´t really say how it compares to a MPCNC just yet.

My MPCNC showed some significant flex on the four main feet. I wanted to solve this quickly with small amounts of material and without additional hardware, except screws. 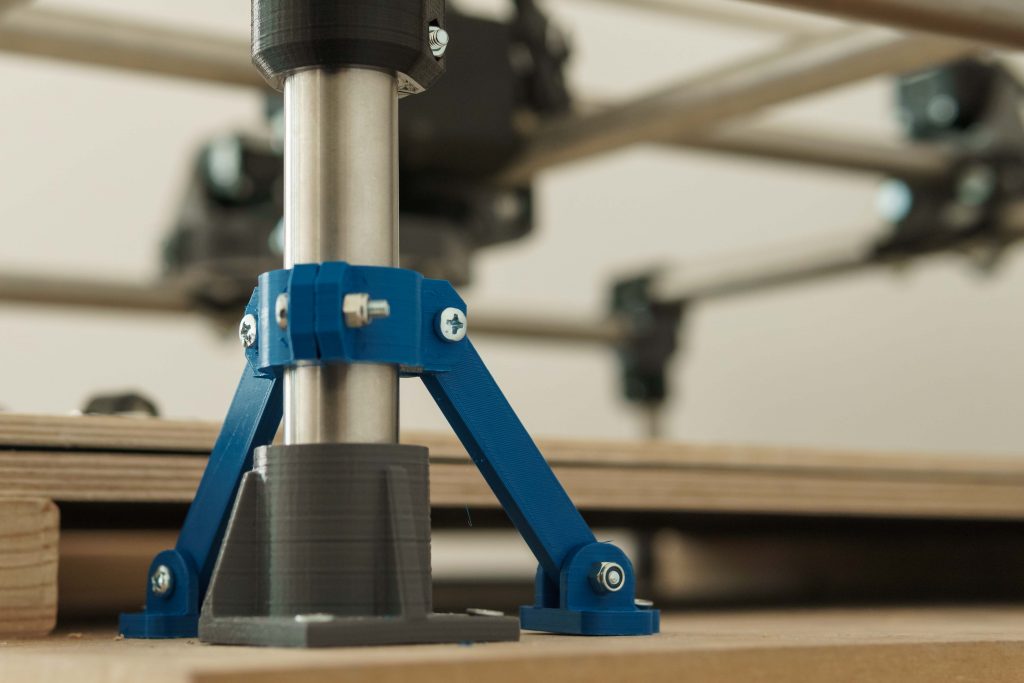 It might look kind of funny and when you already modified your corners in some other way or got them low, the aren´t necessary I guess. If you still got most of the original parts, this little gem will help 🙂 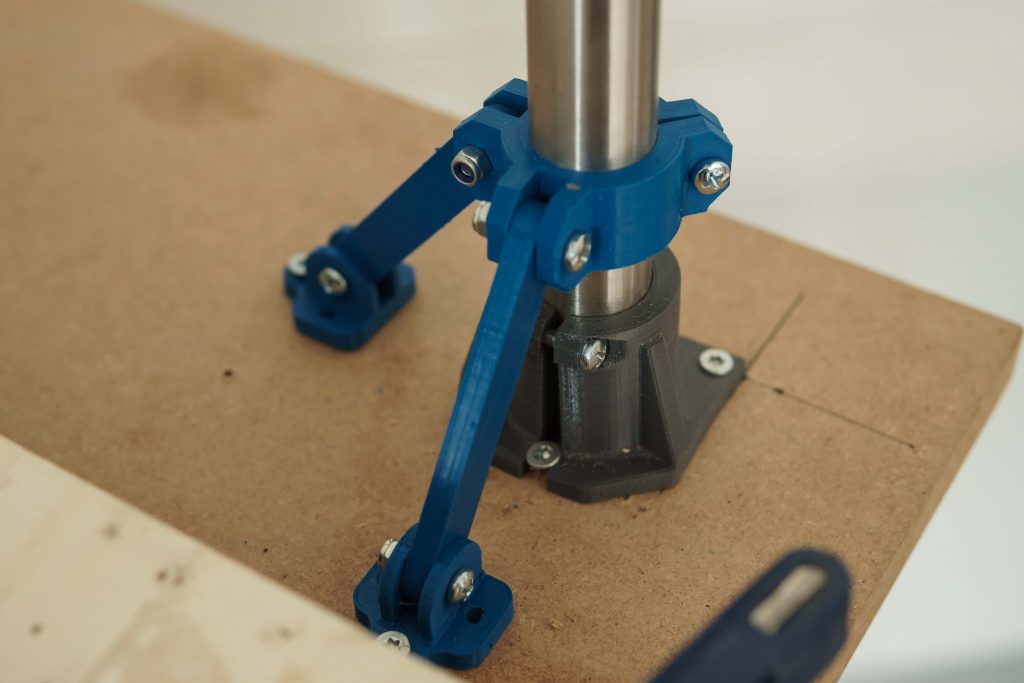 Bring the two feet in place, screw them down and the clamp will bring up the tension on the struts.

I thought about building a automated plant care system for some time now. The main purpose was to grow camelia sinensis in a controlled environment, as my three attempts of growing it in a living room or balcony all failed after a year. I was unable to keep the conditions constant enough it seems. I gave up on that, as the grow rate of tea is too low to cover the necessary quantity anyway.

Instead I´m trying to revive my biotechnolgy knowledge and start a printable bioreactor design for cultivating algae. It is not targeted towards a specific species or purpose yet. The first goal is to test the printing process and finding a suitable material with a good transmission and suitable wavelength passthrough. Clear PETG should work as a starting point.

A quick sketch of the concept. The flattube design enhances the surface and therefore the optmum light yield.

I´m searching for suitable equipment that can be sterilized right now. 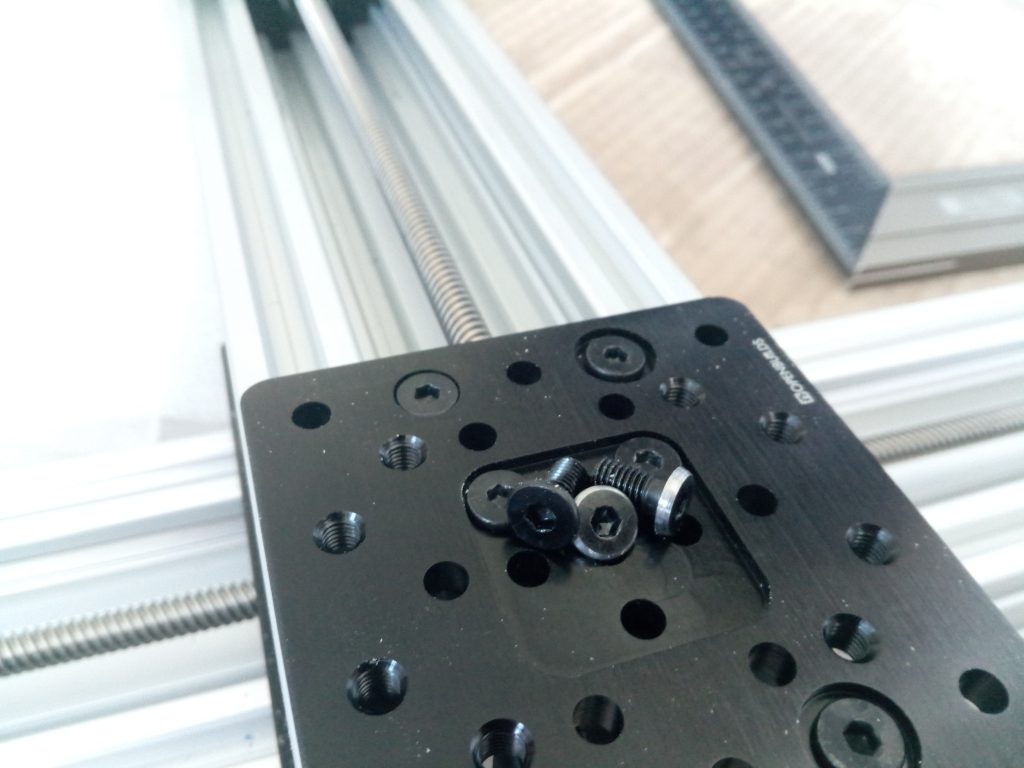 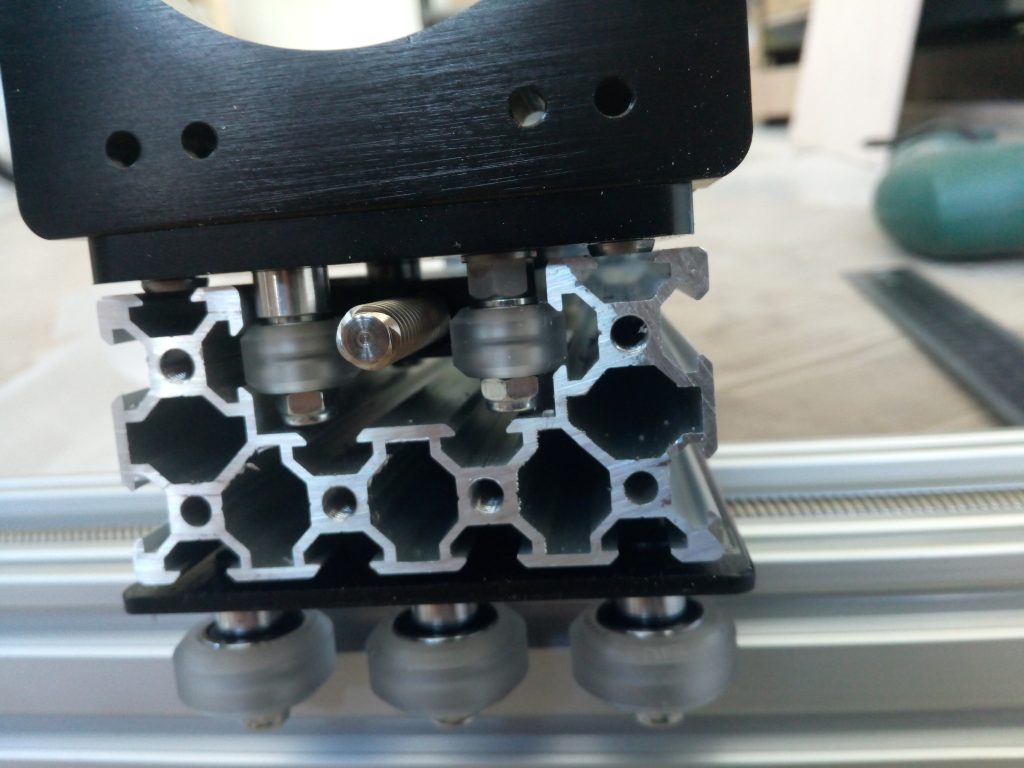 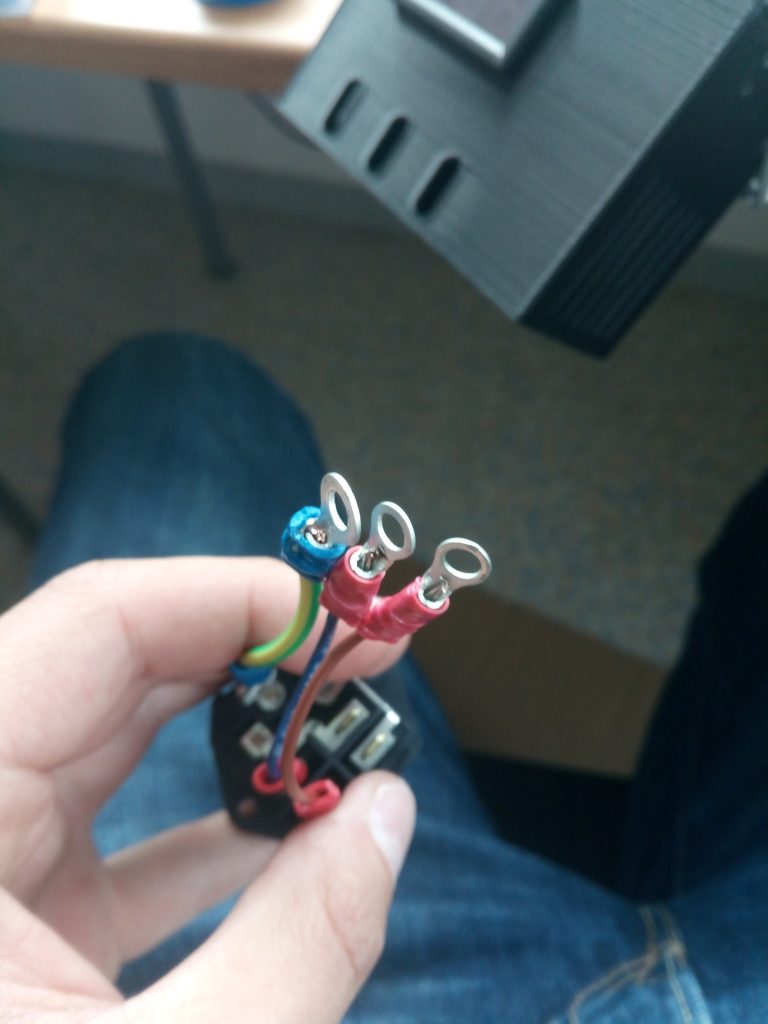 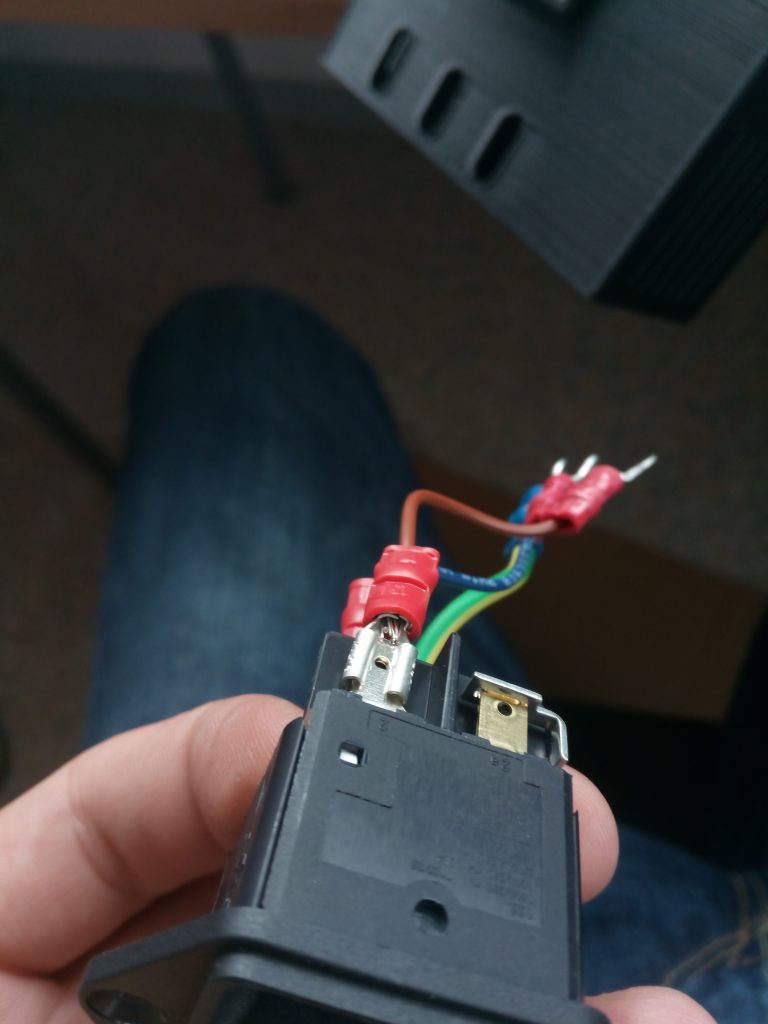 I had the demand for some more serious aluminum milling. I did that with the MPCNC before and it was kind of okay but I wouldn´t like to mill higher part counts with it. The spindle gets  hot after some time and leads to more flex in the toolhead. It´s not made for aluminum so I looked around for a more suitable platform.

I found the openbuilds C-beam machine to be nicely designed and versatile enough to be worth adding to my machinepark. I looked around for a europe based shop and found openbuilds poland  , v slot europe and ooznest .

I decided to go with the ooznest version as they had the best full kit. I didn´t wanted to source all the parts from here and there. Sometimes it´s nice to have a complete package 🙂

The sipment was fast after the payment went trough and so I had a first look at the package today. All was nicely packed and labeled according to the build section like X, Y and Z Axis. The printed parts for the power supply and the controller board looked pretty nice and felt solid.

Can´t say much yet but a real manual would be more comfortable than a build video. It´s way faster to look at a drawing than to forward, play, stop, rewind, play, the buildvideo 😀 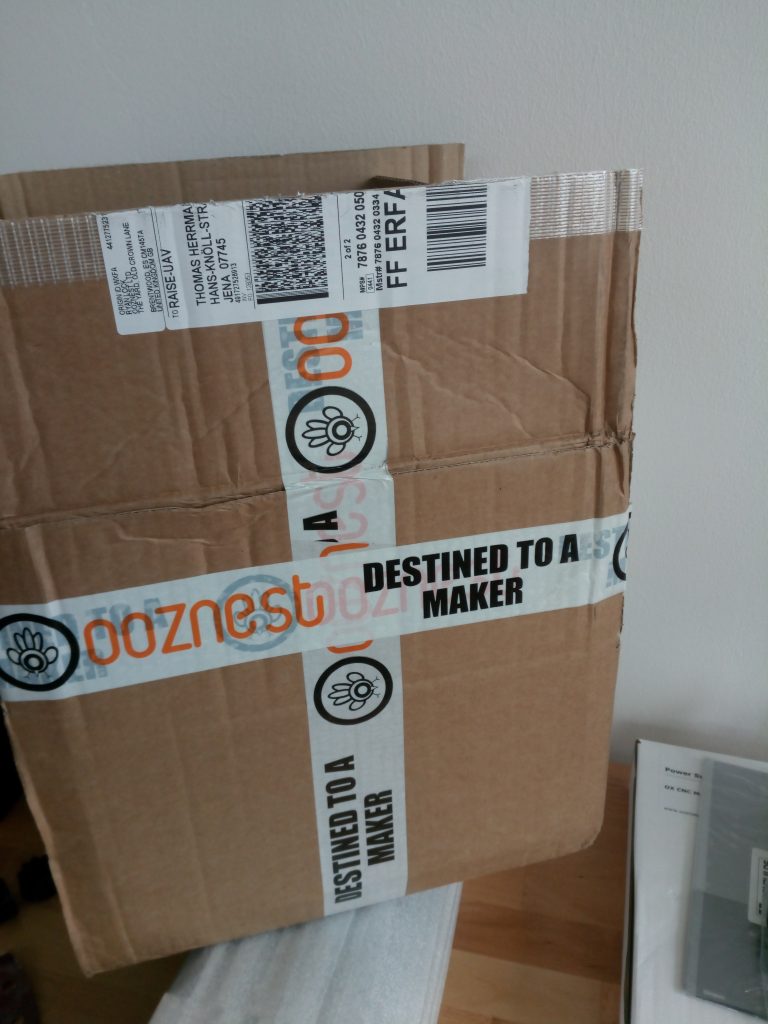 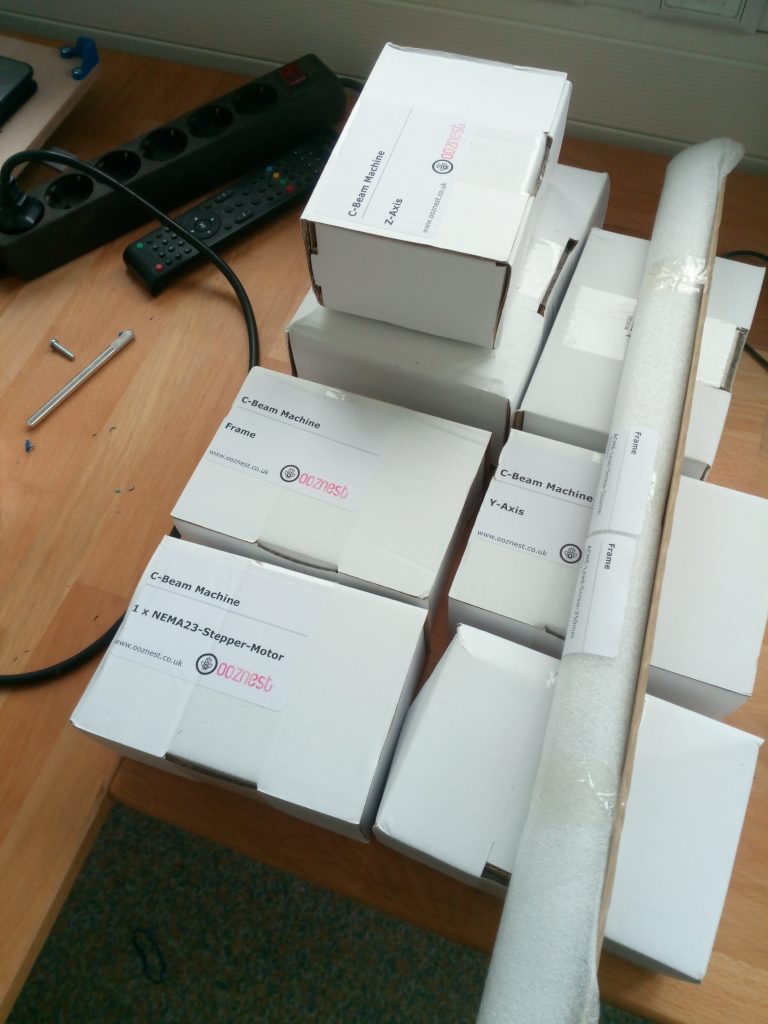 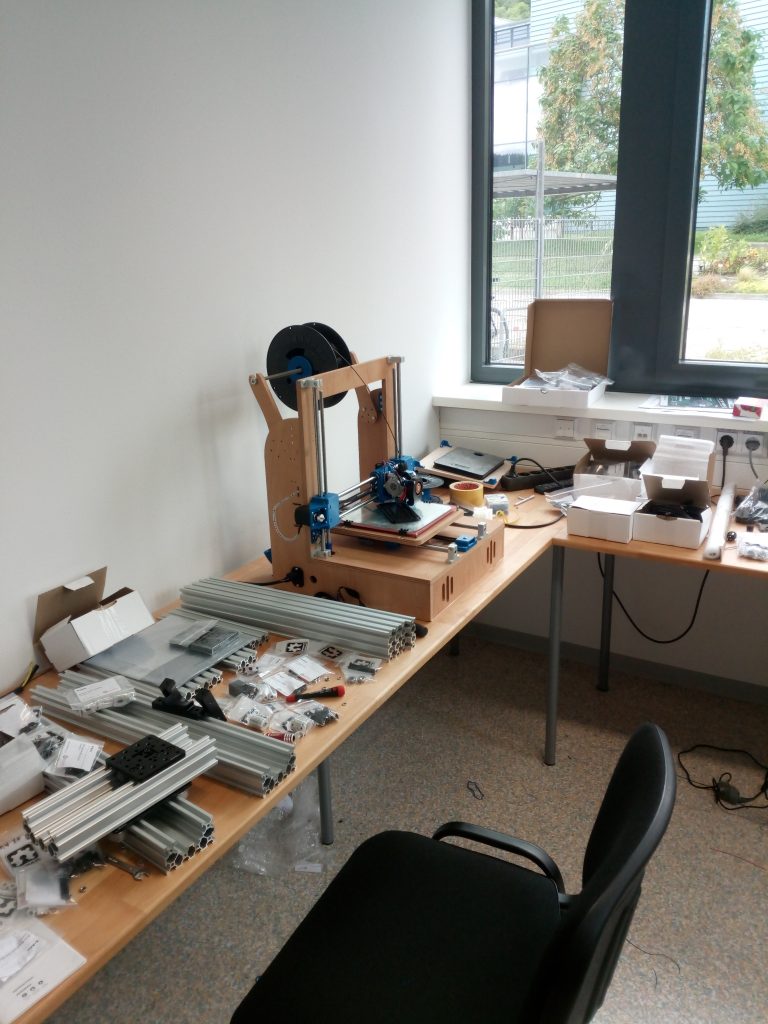 Surprise! I had a common chip clearance problem. I considered this as a cause from the beginning and also got some tips from the vicious1..com forum. I milled two complete sets of 3D-printer frames without problems so I couldn´t  believe that this was really the cause.

I drew a test pattern and managed to get it right with an additional ,5mm helical drilling movement. That seems enough for the chips to clear the hole.

I don´t have that much time to get into those issues but the parts didn´t came out perfectly rectangular yet. I tried to manually adjust the stepper position before powering it up but thats still not enough to get the precision I need. I´m using all of the available travel so I´m getting quite a big error in the end.

I need to readjust the frame and the feet as well. 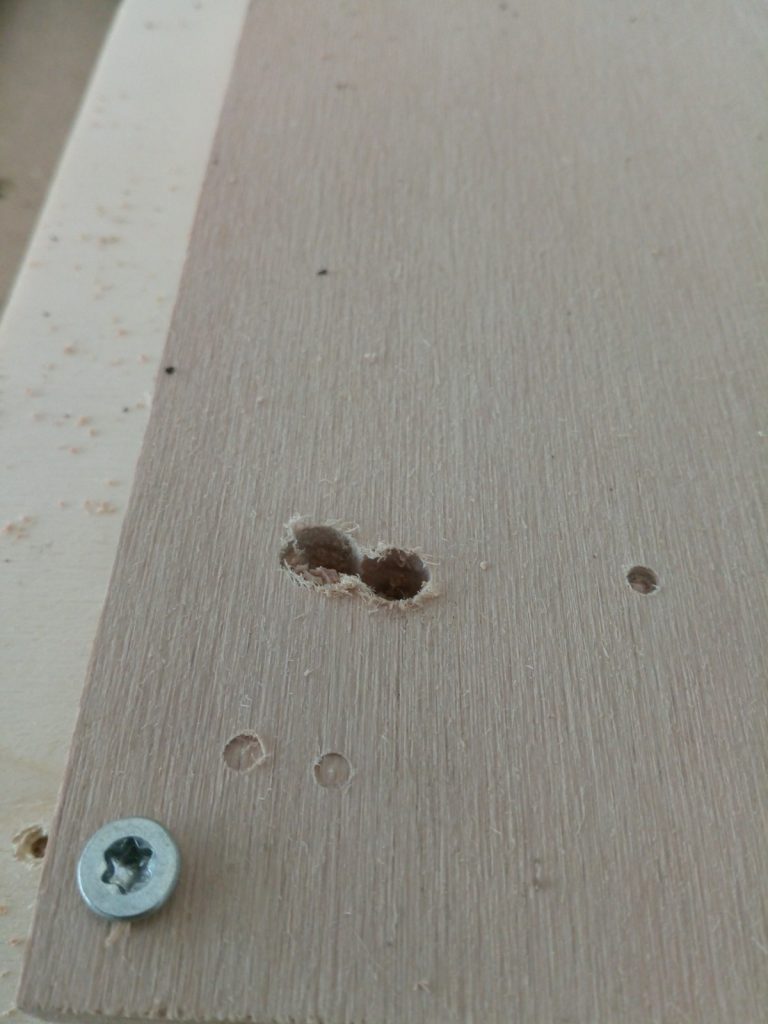 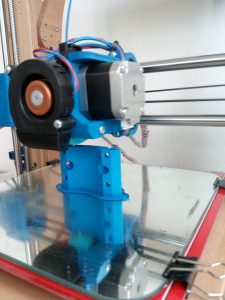 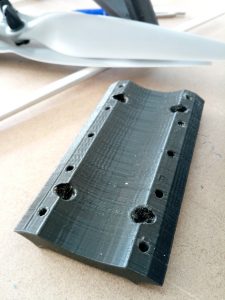 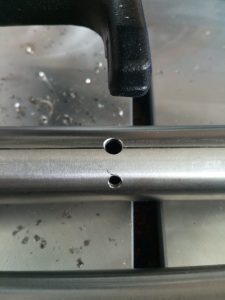 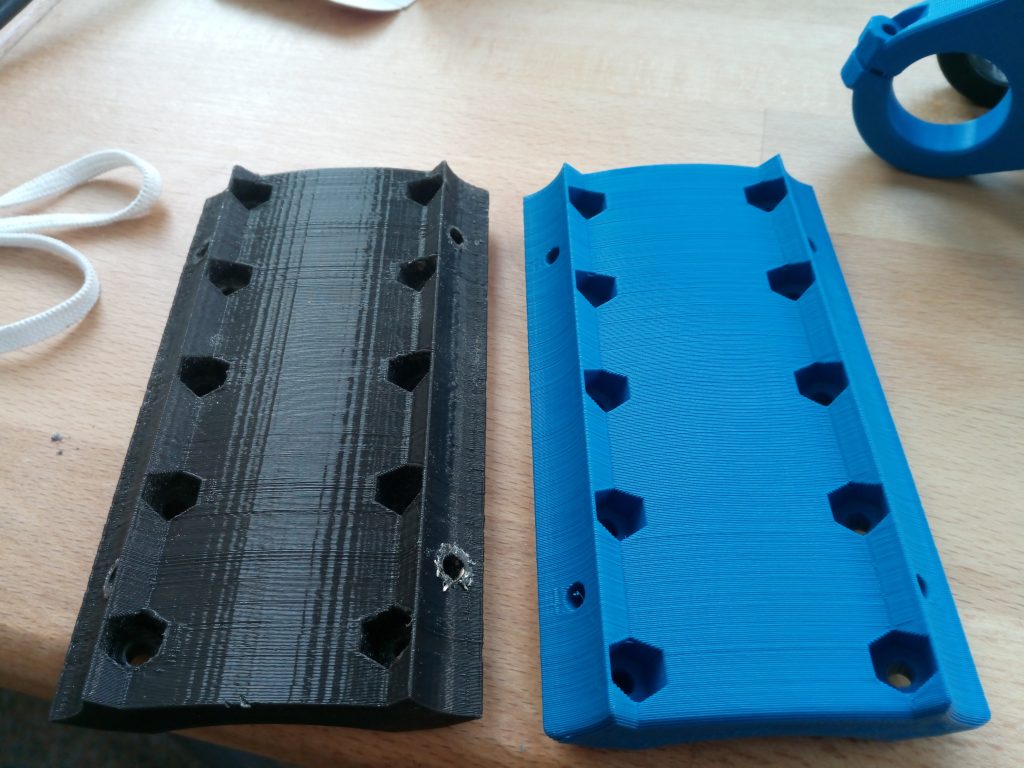 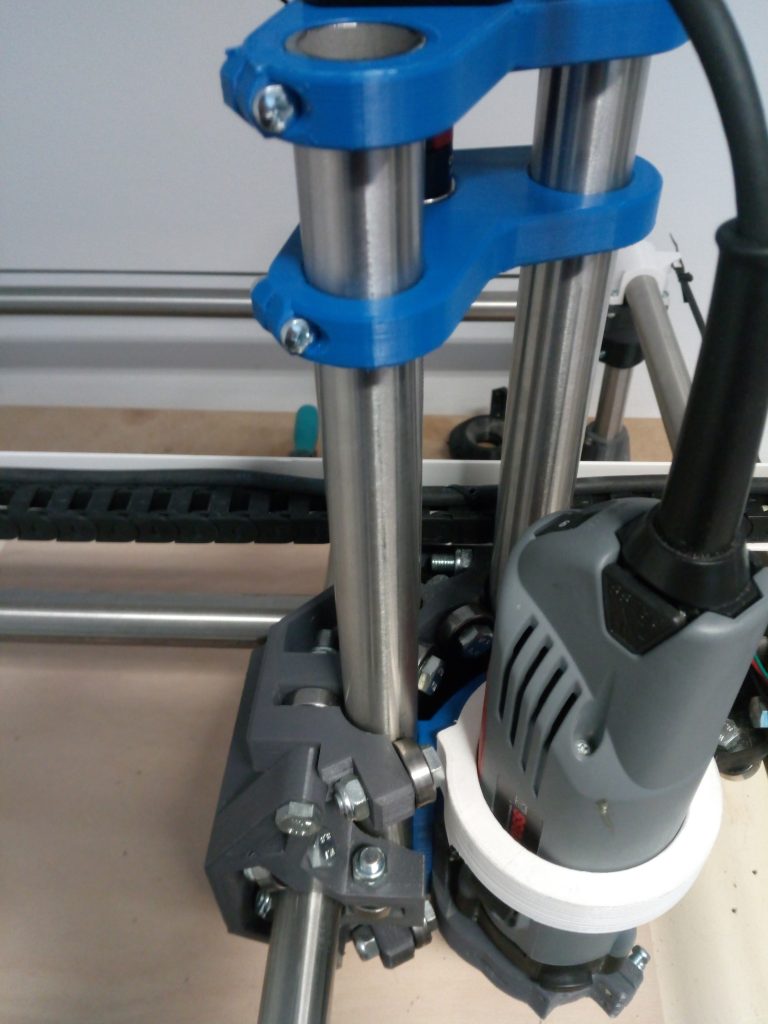 Now everything is assembled again. The tubes are now „perfectly“ straight and parallel. I used a glass plate to verify the alignment.

I founded a little company called raise-UAV. The main advantage is the increased time for my projects and that was totally necessary when I look at my roadmap. 🙂

It is primarily focused on the development of open drone systems manufactured with 3D printing technology.

The printer and the mini ghost I´ve started here will be hosted on the company side to keep things easier. Other things not drone and printer related will be posted here on the kleingeist blog in detail. Next bigger projects are a printed and easy to build kajak and an „earth rover“ for research purposes. 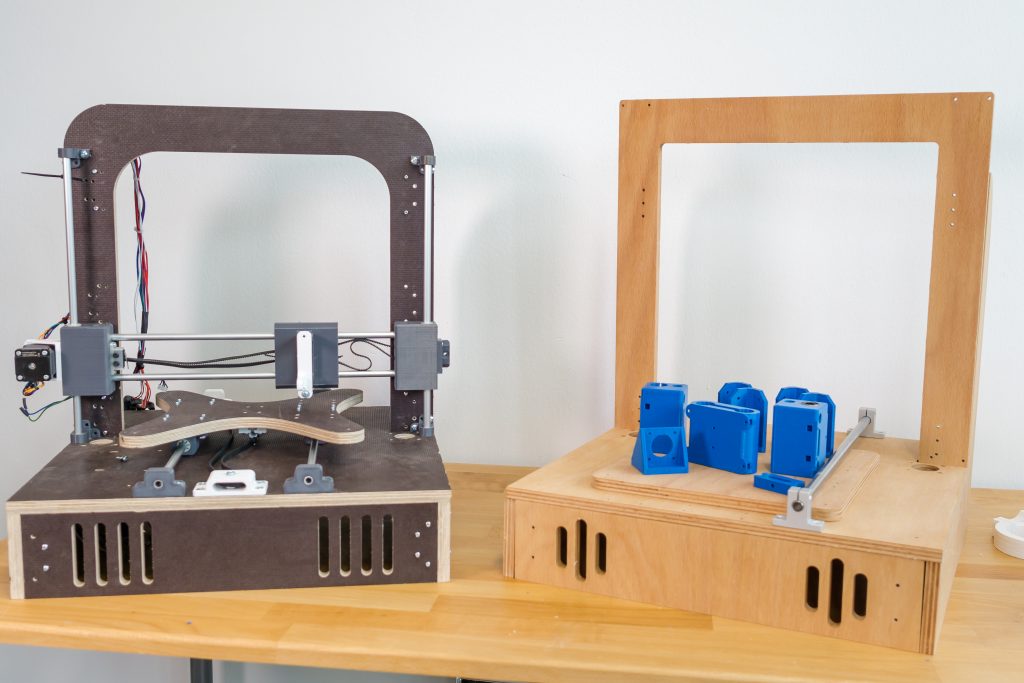 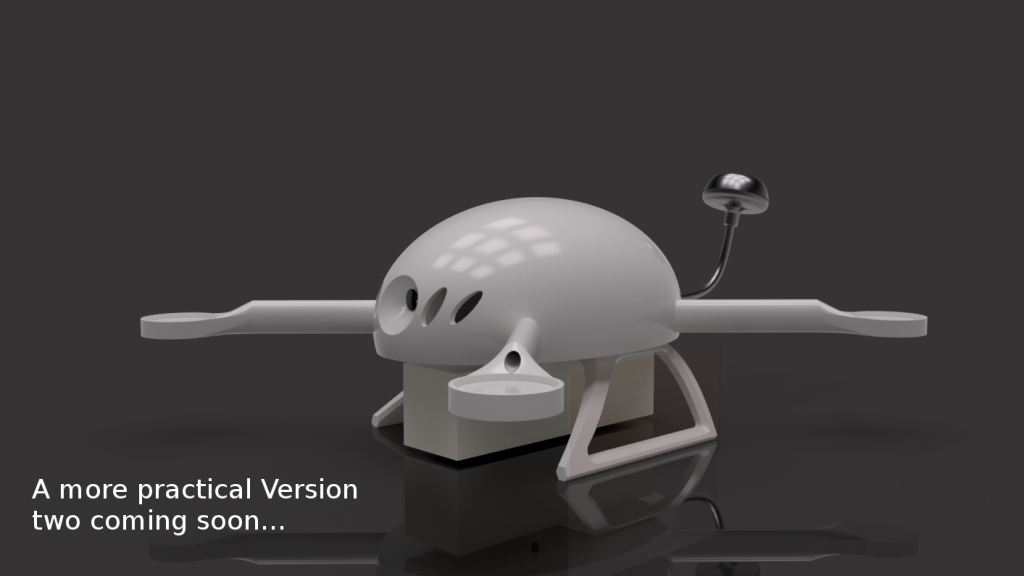 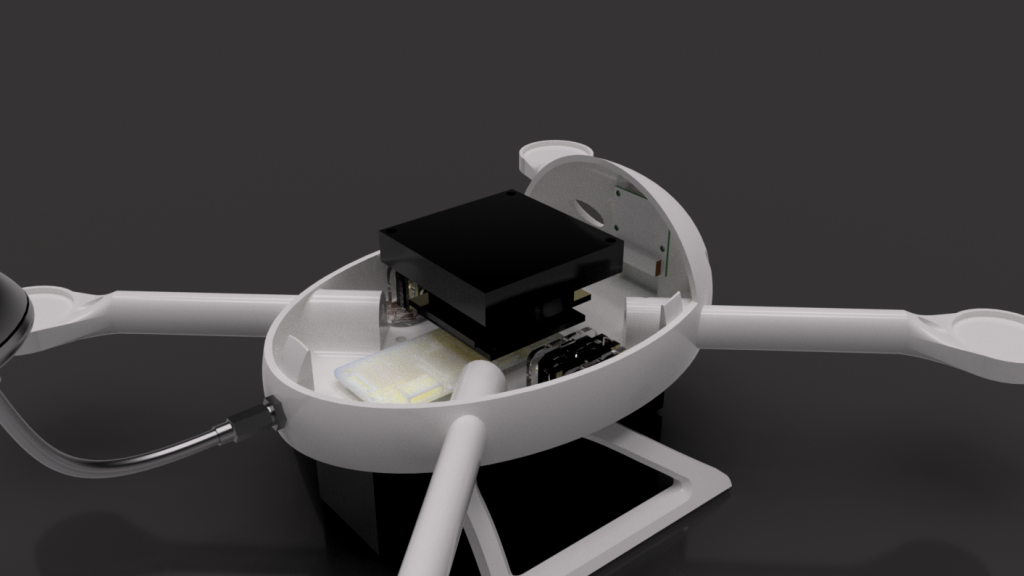 There will also be a shop on raise-uav.com where you can buy kits and ready made articles to keep me funded for further development.

Has been tested intensively now. Works ok, with a little practice. I guess I can´t expect more from a printed design due to the weight shift with 500 g class DSLMs. Nevertheless thats enough to do some close slides for products etc.

There might be some documentation necessary before releasing it on thingiverse as the mechanism needs to be adjusted correctly.